Zeus is the tallest dog ever according to the Guinness World Records; however, Freddy, another Great Dane from the UK, proudly holds the title of the tallest dog alive since 2017.

He needed 12 cups of food a day to maintain his 155-pound (70-kilogram) body weight. He was the size of a pony and did not fit comfortably in a regular car.

On the opposite side of the spectrum, Boo Boo, a chihuahua, held the smallest dog record until 2014 when Milly, also a chihuahua, was announced as the new world’s smallest living dog.

Turn your love for animals into a rewarding career!

Dog Training For Humans – How to Play with Your ...

Reiki Energy To Heal Yourself & Your Animal

Enroll in an online course

The tiny, brown beauty from Puerto Rico got the title thanks to her height of 3.8 inches (9.65 centimeters), beating Boo Boo, a 4 inches long hired Chihuahua from Kentucky, who held the title of the smallest dog for several years without anyone being able to dethrone her.

Milly grew up with two canine sisters of regular size and enjoys being among humans, because she is not aware that she is a dog.

She is a tiny dog with a big personality who knows how to pose for a picture, despite her size being only ten percent of Zeus’ height. 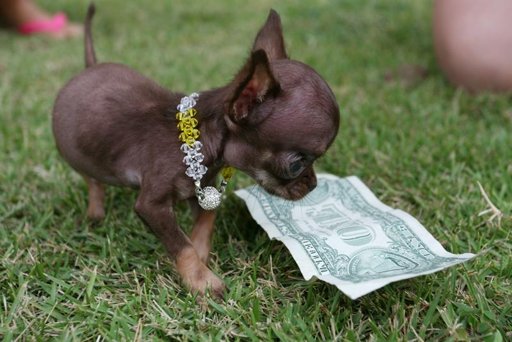 Join our pet-friendly community! Receive our newsletter with news and exclusive offers for members.

Make Travel Anxiety a Thing of The Past

Bring your dog along on your next adventure

Do You Have a Pet Friendly Rental?